Tournaments and their lack of inertia in Cape Town

So this weekend past (21 / 22 January 2012) was the Western Cape Regionals for Warhammer 40K.
See the first post here:
http://www.warhammergenerals.co.za/forum/viewtopic.php?f=9&t=7361

Some points of interest to note from this post: Nationals rules pack.
A handy link to it:
http://www.warhammergenerals.co.za/forum/viewtopic.php?f=9&t=6606&hilit=nationals+40

NOTE: I’m the first to admit I made a mistake in my army list in that I didn’t pay for Halberds for my Grey Knight Strike squad (would have changed my army list slightly in that they would have been Initiative 4, not 6), or I would have played with 30 points less bling somewhere else.

I also played my Callidus Assasin wrong in second game: she can’t assault from when she arrives any more. In that game, she took out a unit of Tank Hunting Terminators. I don’t think they would have changed the game much, considering I have no tanks / rides in my list. At the end of it, I had 1 objective in his half, and he was contesting the one in my half. The tank hunting terminators were in middle of the field, foot slogging towards me, about 30 to 40 inches from my objective. Would they have gotten there? Who knows. After the game opponent spoke to a mate, we checked the book, we went to organiser and spoke it over. I suggested we make it a draw, opponent was happy with that.

I have issues with what happened this weekend, and what is in the rules pack.
Starting from the beginning of the PDF rules pack:
Page 2, then on page 4 – Scoring for Appearance points.
There was no scoring for Appearance points. Some people were not only playing unpainted armies, but even unassembled. “Legs on a base” type unassembled. I spent WEEKS getting my figures just perfect. I even changed my army list due to the fact that I didn’t have a figure with a Psycannon. Oh how silly I was. Heaven forbid someone might actually want to see the ACTUAL figure have the ACTUAL guns it’s got.

Page 4 – Game conduct. Nothing of the sort. No scoring for it.

Page 6 – missions were decided there and then. Didn’t follow these set out scenarios at all.
Organiser used a piece of paper and a dice. Then he left halfway through the third game cause he was tired. Apparently been up for about 30-odd hours.

To my mind, there is a certain responsibility with playing in a Regionals. There is a dedication required. If you can’t deliver a good service to people paying R100 for an entry fee, where’s the value for money in that?

If I or any of my gaming buddies raise the questions around having unpainted figures etc etc, we get the same answer: it’s to stop people from being penalised and to allow them to help the hobby grow. Ok, so how come the same people have the same partially assembled figures from the same (no, less) players then when I last played in the 40K tournament in March 2011???
Answer me that, oh organisers of 40K stuff in Cape Town.

Oh well. So much for 40K tournaments. Will try again in another 10 months time. Maybe. Ok, probably not.
Posted by CT Wargamer at 9:47 AM No comments:

So I finally bit the bullet, and admitted I'm too scared to paint my Titan. It's been sitting in the cupboard looking at me each time I open it. So, next week Monday I will deliver it someone to assemble and paint. Should take about a month, he estimates.

Nervous, but roll on Apocalypse games.

The colour scheme I'm aiming for: 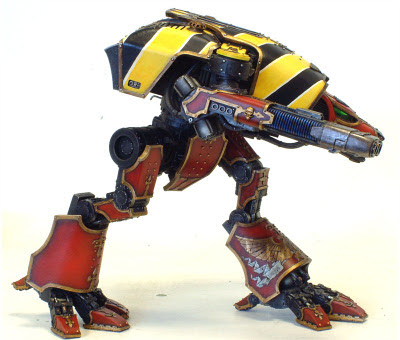 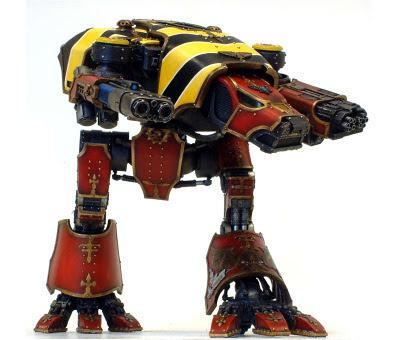 Posted by CT Wargamer at 2:09 PM No comments:

Sad news for scenery fans - Woodlands Scenics has burnt down.

There was a large fire at their factory / offices, everyone safe and no injuries, but completely gutted their plant.

I've used their products a lot with scenery both for Wargaming and when I did model trains.
Posted by CT Wargamer at 8:15 AM No comments:

So this is a post giving some support to future / current parents and their wargaming, specifically when they have kids.

I've got two daughters - 4 and 7 years old.
When they were both born, for the following 2 years my gaming took a SERIOUS knock. As in, reading websites, painting the odd figure MAYBE getting a single game in every 3 months.

I know there is a fellow blogger / gamer out there who is soon to have his second child. You will take a knock in both space and time, ie no time for gaming, babies are small but their stuff takes up a hell of a lot of room (defintely a time continum issue there - thinking of time travel gives one such a headache I find).

My advise:
hou die geloof which translates roughly to keep the faith. It will get better.

Wait until they're a bit older. Mine currently have SO much fun being in the Man Cave, as well as helping when I need to do flocking of bases.
Posted by CT Wargamer at 4:28 PM No comments:

As more and more stockists in Cape Town have other non-GW paints in stock, such as Deckle Edge, Model Railroad specialists etc, I found a handy chart for compatibility.

So the MAN CAVE, I mean Wargames room, is done.
It's a solid concrete out-building (was a storage room), about 5m x 3m.

Walking down path to Entrance: 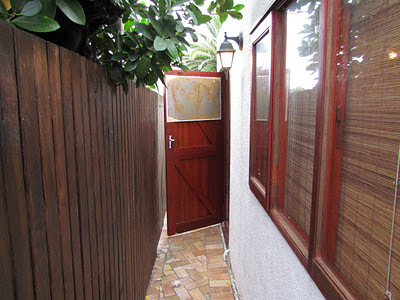 View as you come in: 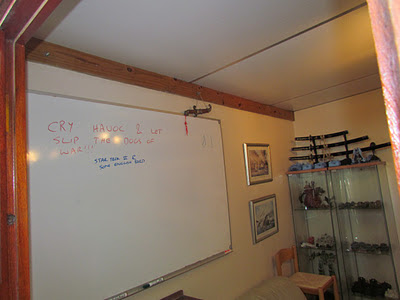 Straight ahead opposite the door: 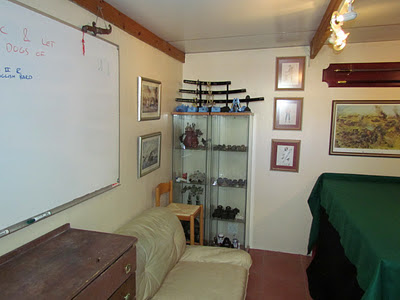 Towards the other side of the room: 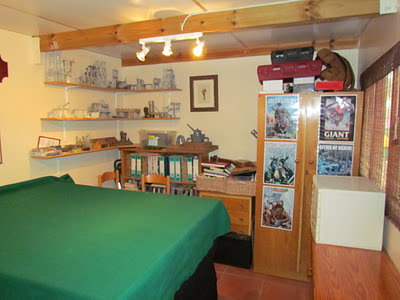 Looking more towards the table: 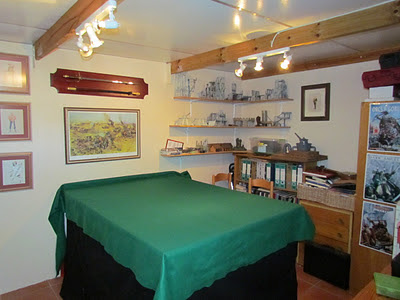 View from other side of the room: 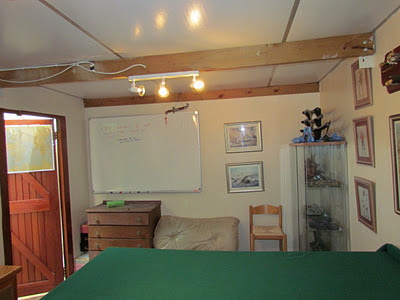 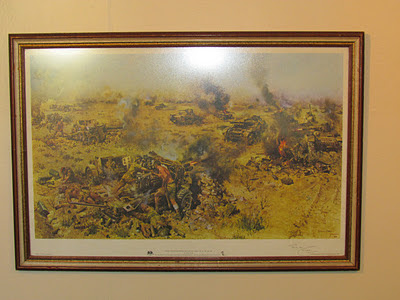 The deciders of fate: 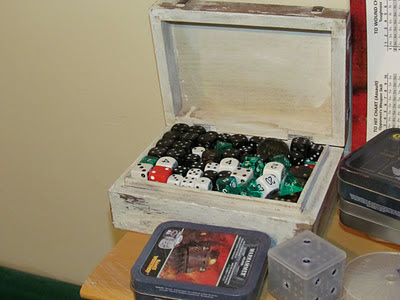 Some Medieval looking buildings found at a school fete: 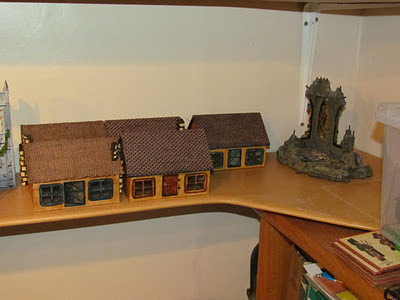 Looking towards the window: 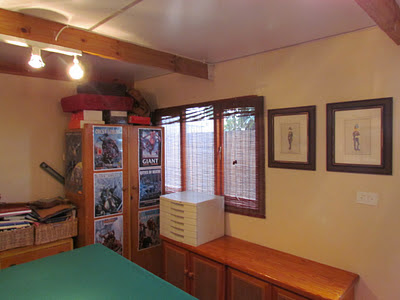 All that's missing is the bar fridge....

Posted by CT Wargamer at 8:35 AM No comments:

So after a long non-blogging hiatus, I've decided to get back into it. So, here I am!!!