The Witch Hunters codex can be seen as one of the most loved and most hated army choices around. Allow me to unpack that a bit. From a modelling perspective, all the figures are metal. From a play style perspective, they are a bit weaker than most of the current army books, suffering from codex creep. But, they're not as weak as the fellow Inquisition codex - Daemonhunters.

I personally am a bit of a "tread head". I love tanks. The more the merrier. Saying as such, I tend to build my lists (I'm the first to admin they don't always win) from tanks / transports and take it from there. I also tend to favour playing a single force. i.e. I don't really enjoy taking allies. I will if I want to, but first choice is to not.

My current favourite build for SOB is to put the following down:
Heavy slot:
3 x Excorcists as my Heavy Choice. That is potentially 18 shots with 48" range Strength 8, AP1 per turn. Make sure to move 6" backwards and forwards each turn. I think of it as a Exorcist shuffle.

For fast choice, 3 units of Dominions in Immloators.
all 3 units are the same, apart from one has 5 Sisters vs 6, as the Canonness will join. Units are:
6 Dominions, 4 are armed with Meltaguns. Veteran Superior. In an Immolator with Extra Armour, Twin-linked heavy flamers, and Smoke Launchers.

That's 3 units, with 12 Melta shots per turn out of them, and 6 flame templates per turn.

Ok, here's where I fall down a bit. I pad the rest with 3 units of 10 Sisters, 2 units have Imagifiers, Veteran Superior and Book of St Lucius. RUn like heck to get into cover.

I have to buy more Rhinos first, and can then play around with other options.

What I'm trying to say, is that the SOB is a very competative force, in the right situation. It looks very good on paper, but in order to win, it's not a starter army. You need to play it carefully, and use terrain cover to your best advantage. I normally play with the 3 Immolators close together, and the Sisters on foot running behind them.

Comments?
Posted by CT Wargamer at 3:08 PM No comments:

So what are ideas for Thunderwolf cavalry? There's no offical Games Workshop figure at the moment, so you have to make a plan. One way, but a bit expensive, is to use other wolf figures. Here's an example of a Circle of Orboros War Wolf (from Hordes) with a Space Wolf marine on top: 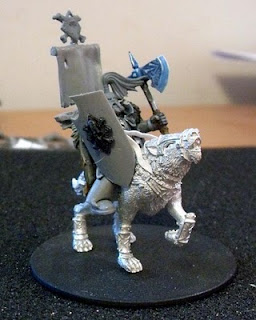 I hope I'm not the only one who finds it hysterical that some of the new Blood Angels have "nipple armour".

Check this:
Nipple armour - click on the picture to make it big.

What's going to happen when Witch Hunters come out?
Posted by CT Wargamer at 11:56 AM No comments: